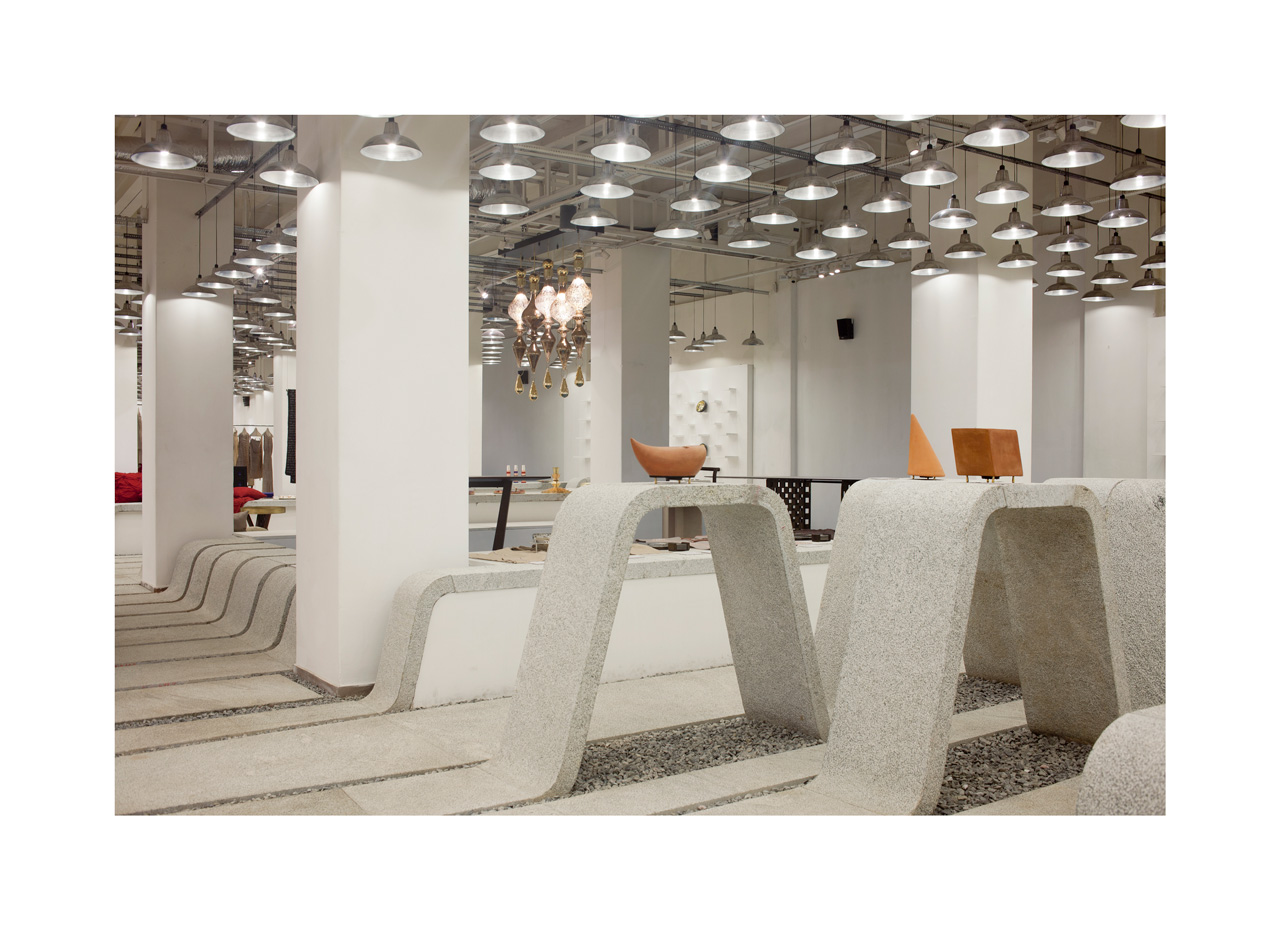 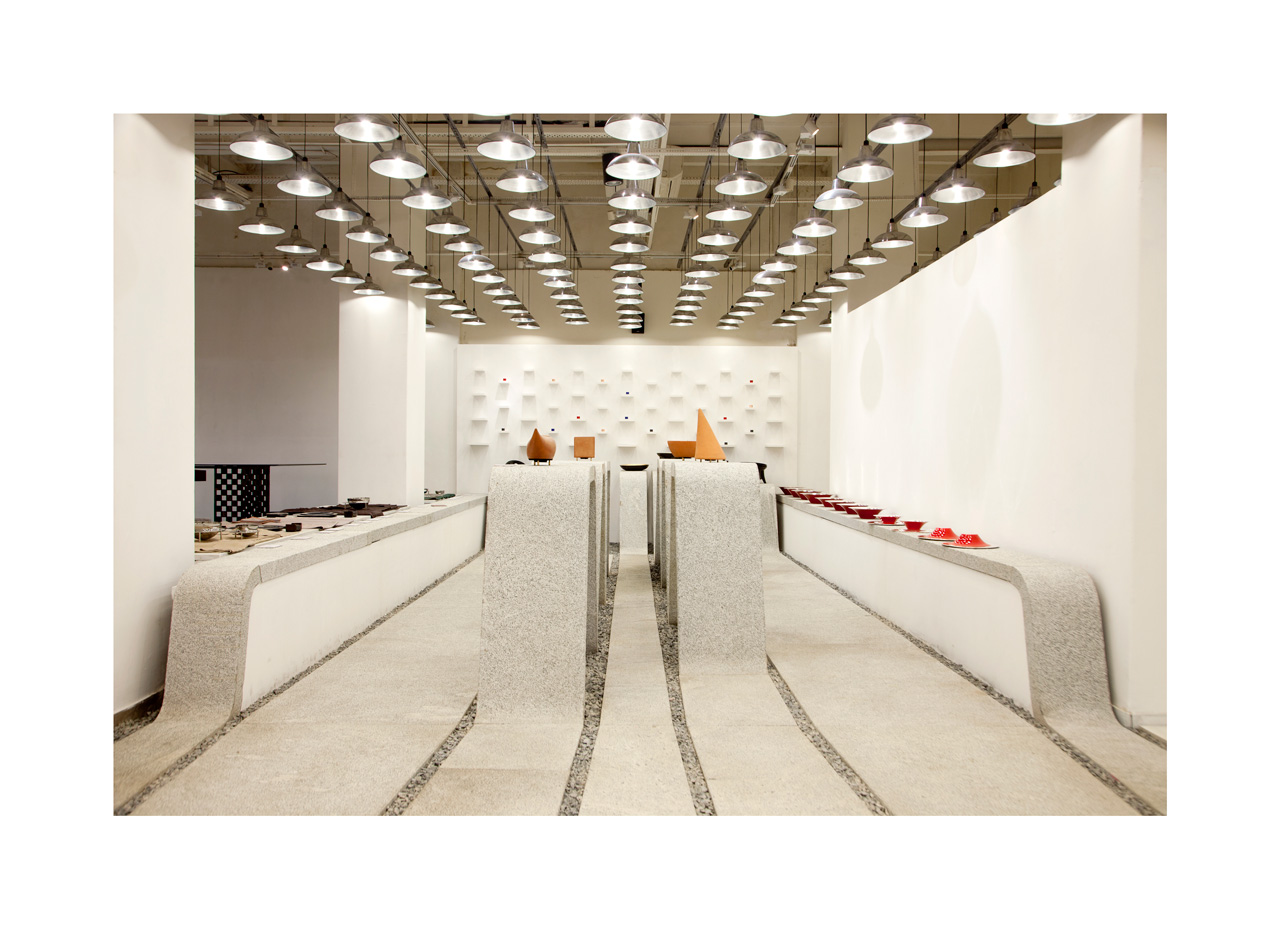 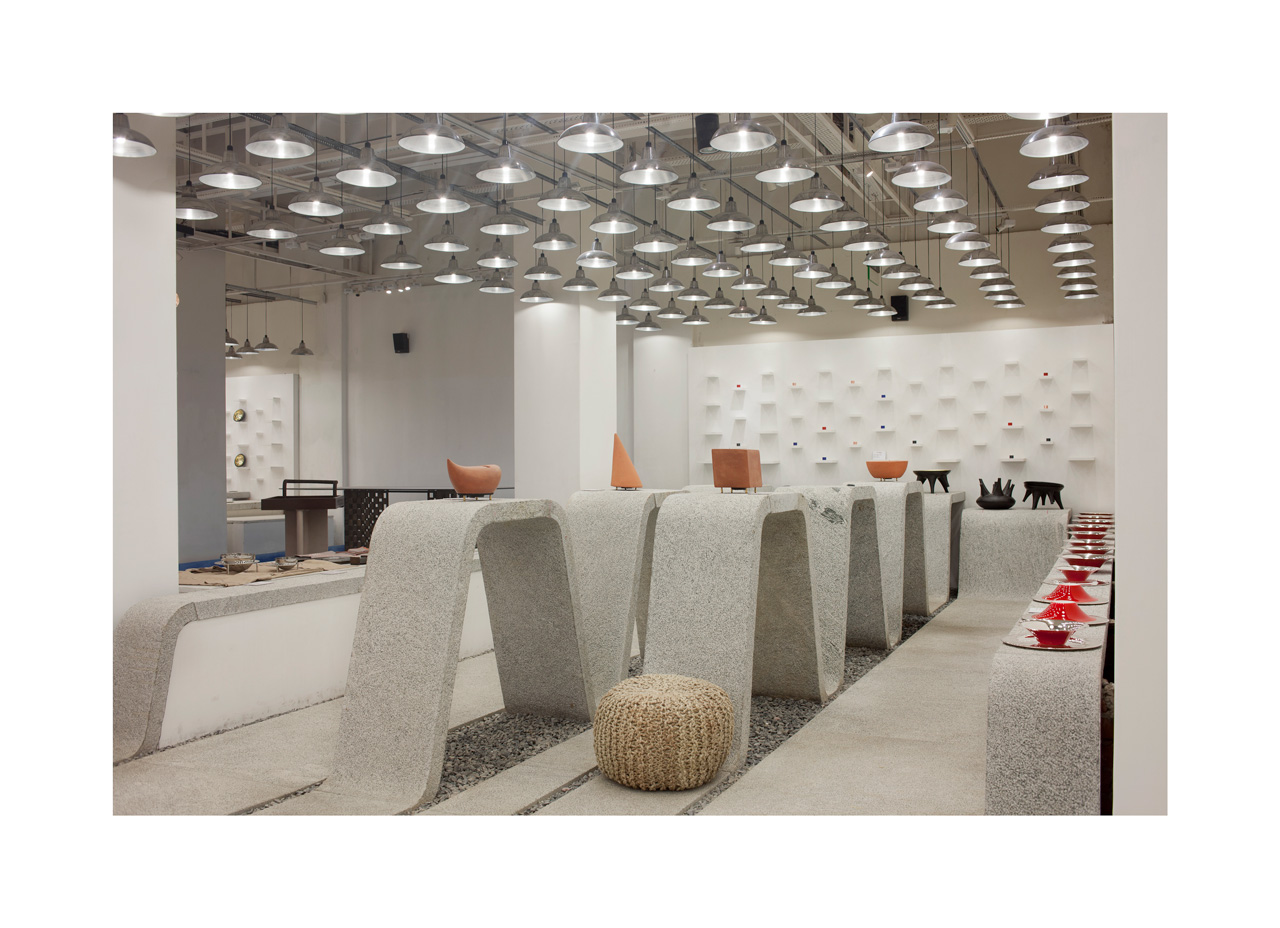 Made in India’ is a new brand that presented its products in an exhibition in Delhi with an international luxury store look;starting from a reference to Indian culture but developed into a contemporary international concept. Be Open, a cultural and social initiative that aims to harness the brainpower of creative leaders with the aim is to help ‘brilliant young creatives, architects and designers to shape the future’.

‘Made In India’ is the starting point of the project ‘North/South/East/West’ which focuses on the interaction between these cultures and creativity.  The project investigates the survival of craftsmanship in an increasingly technological world, exploring traditional crafts as a way to develop new ways to approach the future, and ‘mixing crafts and design’. The 600 sqm of gallery space displayed around 200 objects designed by 26 designers. A substantial area is designed as ‘empty’ relief spaces that contribute to the overall atmosphere of luxury by including ‘surplus’ space consisting of water basins, bench seating alongside water basins and circulation space.

A key material used is large white granite slabs with grey speckles, finished with traditional hand levelling techniques to reveal a more interesting texture and enhancing the natural material rather than its common current application as shiny machine polished reflecting surfaces most commonly seen in hotel lobbies and such. The skills of a Tamil Nadu stonecutters community lend themselves to produce a landscape of undulating floors shelves and benches in solid granite that will make the flat and otherwise heavy material look fluid and elegant. The video shows how it was made. The other key material is ferrocement, more contemporary and sophisticated material that is also essentially a hand crafted elements. These slabs are smoothly finished with waxed and coloured cement pigments in either off white or turquoise blue as shown in the Video.

The architectural elements such as shelves become part of a new undulating landscape, that recedes in the background to set the objects to be displayed, so that the designed products including furniture are seen without competing with installation design for attention. This design focuses on the negative space, which is contemporary, establishes the mood and the context for defining the brand image rather than being perceived as very ‘visible’ design. The only elements that are perceived as stand-alone objects are the designed products that are being exhibited.

To achieve the sense of broader spatial unity that gives the space a strong and unique identity, continuity is established between the various architectural elements like walls, pillars, floors and ceilings. These are no longer be perceived as separate elements but seen as continuous surfaces that flow into one another seamlessly, making these indistinguishable and indivisible into separate functional elements.

The materiality contributes to the spatial experience recall references to Indian culture in a contemporary application with the focus on the particular crafting of the material, rather than the material itself. Patterns and textures are not merely overlaid as if existing for themselves but strongly connected to the lines and surfaces that emerge from the spatial movement in a three dimensional application. The integrated approach to treating colour and texture is sober and quiet. Here to establish luxury in the ‘Indian sense’, there is richness in the tactile and textural treatments bringing together diverse materials and crafts within a similar colour palette. The perception will be neutral (but embellished) when seen from far with designed objects being the objects of focus; however as one approaches the surfaces further patterns and textures appear so as to reveal new information in a gradual way. This is not unlike luxurious embroidery in sarees or jewellery where the intricacy is revealed at an intimate close-up view. The overall patterns are perceived more as textures when seen from far keeping the focus on the essential forms that are simple to read. Various shades of grey are generated to a great extent by relying on the diffused light in the space to create subtle shadows and shades.

As the exhibition reveals the luxury potential of craft, for me, the real luxury is the sheer time devoted to the making process; neither the craftsmen nor the users have any sense that they are ‘wasting’ time.

‘Made in…India’, by Dezeen Studio.

Winner of NDTV’s ‘Commercial Interior’ design award of the year.